Top 10 World Class Philippine Beaches You Should Not Ignore

Philippine Beaches – The Philippines is an archipelago composed of 7 107 islands. Every island features an abundant biodiversity which range from its warm rain forests as well as mangroves, mountain ranges, coral reefs, world-class stunning beaches, spectacular islands and varieties of flora and fauna. Being a tropical country, truly one of the several ultra diverse countries on earth.

The Philippine beaches have the finest white sand coastlines on earth and considered as one of the many tourist destinations. If you are planning to travel and cannot decide where to go, the Philippines is an ideal destination for you.

Boracay is a small island situated in the province of Aklan and viewed as the most famous tourist holiday destination in the Philippines.

Boracay is renowned for its powder-like white sands, and breathtaking crystal clear blue waters. Also, a well-known tourist attraction in the island is the nightlife because it features various exciting activities.

Many pubs, discos and nightclubs cover the coastal areas of Boracay. Additionally, it provides activities perfect for relaxation and it is a superb environment for solace.

Water sport is also common in the island. One can do snorkeling, scuba diving, and seeing many various water species in which many are native to the island Philippines.

Located in the northern part of the Bicol, sits the charming island of Calaguas. It is defined as a group of islands within the Camarines Norte region that comprises Maculabo Island, Guintinua Island, the well known Tinaga Island as well as other minor islands and also islets.

Calaguas is renowned for its extended white sand beach and excellent, turquoise waters. The location is visited by tourists, mostly for camping as well as water activities. Regarded previously as the Hidden Gem of Camarines Norte. Despite the developments as well as commercialization, Calaguas remains very attractive to most locals and tourists. 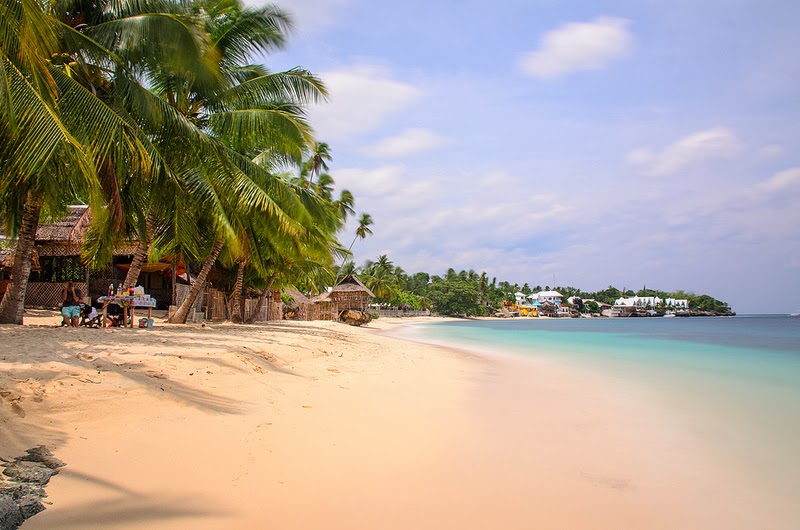 Bantayan Island consists of 3 municipalities of the Cebu province such as Bantayan, Madridejos and also Sta. Fe. It occupies the western as well as central areas and recognized for its charming sunset and century old churches. The fishing village is called Madridejos and famous for its wealthy history. Finally, Sta. Fe features beautiful sunrise and renowned for its extended exceptional white sand beach.

The island is less crowded and not as much busy compared to other popular island destinations within the country, It is ideal for people who chase beaches for some time of leisure and reflection.

Iloilo is known for Dinagyang Festival – a yearly celebration performed every 4th Sunday of the month of January to pay tribute to Sr Sto. Niño and commemorate the landing of Malay settlers. The song-like tune of their dialect, Hiligaynon, and not just that, but also endowed with plenty of historical Spanish churches. Each one offers its own distinctive features. Nevertheless, the Iloilo province, is as well blessed with plenty of natural charm, and one particular place in which aesthetic feasts is found, is in Concepcion – a town that takes 2-3 hours from the city.

Concepcion can be described as a destination of arresting charm. It is endowed with the most picturesque seascapes throughout the whole province of Iloilo. The glowing blue waters are filled with sixteen islands, each one have various aspect to offer. One particular beauty is Bolobadiangan Island or perhaps Sandbar Island.

Reasons why you should visit Bolobadiangan Island:

• It features a sandbar that swings left or right based on the wind direction.

• It provides an excellent view of the other outlying group of islands. Among the best view is the magnificent Mt. Manaphag situated in Pan de Azucar Island.

• It is a home to various marine life, which suggests snorkeling as a good water activity on this island.

Anguib Beach is famous for its white sand. It is situated in the northeastern part of the country. The beach is extremely ideal for scuba diving, motor boating, jet ski riding, and other water sports. Also, it is referred to as “Boracay of the North” for its fine white sand as well as dazzling blue waters.

Why you should visit Anguib Beach

You might have plenty on your mind when visiting this place, but many visitors arrive here for leisure. Generally, all of the pleasant activities you can do at the beach like having a swim, wandering the place, and picture taking. Some fascination also can enhance your experience a lot more by speaking with the locals as well as eating their own local dishes.

Those who love camping will like the concept of setting up a tent along the shores. It is a location that encourages conversations to be enjoyed with friends.
Even though Anguib Beach is attainable by boat via San Vicente port, Sta. Ana, you can reach the place also by land through trekking over the hills. Nevertheless, that location is currently owned privately thus nobody is permitted to go through.

Port Barton town is known as a small fishing as well as a farming village situated in a protected bay along west coast of Palawan. Port Barton is a Barangay in the town of San Vicente. The well-known activities for vacationers usually are island hopping, beach lazing, snorkeling, and swimming, in the ocean or perhaps among the 2 nearby waterfalls.

The most fascinating outing for a nature lover person is called mangrove river tour. You can find a lot of the tourist accommodation across the 1.3 km beach yet there are also several resorts along the nearby islands as well as remote beaches.

Port Barton is a wonderful spot for snorkeling as well as island hopping. Every morning is a favorable time for snorkeling – so wake up early to get as much fun as possible. The island of Buluan features stunning white sand beach and crystal clear blue waters. The sand isn't extremely powdery fine, but the island can provide privacy and solace. The island is owned privately, but free to all visitors. Buluan Island remains uncommercialized. As there are no resorts or dining places around the island, tourists can purchase drinks and food from the city. There are also bamboo cottages as well as tables offered to visitors without cost.

The quickest and excellent way to arrive at Buluan Island is by speedboats positioned at Ipil Port. The travel takes 10 to 15 minutes from Ipil Port going to Buluan Island. The speedboats are operated by 3 engines and the speeds is 3x faster compared to standard pumpboats. It has a capacity of 2-4 visitors in addition to the 2 boatmen.

Are you thinking of having a peaceful, tropical island? Simply no contemporary buildings, homes, or roads? Without disco tunes, no films, pollution, no disturbance? Simply a coast of fine sand, as well as a huge ocean serenaded by beautiful seagull cries and a collision of waves along the shore? Certainly, your wish will come true! Also, you don’t need to spend a lot to get in that tropical paradise. You can own that lovely island for several days or more in just several hours of travel.

The island is situated in San Agustin, Surigao del Sur. Set in a quiet municipality having a group of 24 tiny islands. But actually, the islands are uninhabited. They are small land masses consist of pockets or without vegetation whatsoever, but they are covered along with aquamarine water overflowing with life. A number of these islands feature golden brown fine sand. The splendor of Nacpan-Calitang Twin Beach is actually unique: Numerous white beaches, translucent waters as well as an underwater world, which will amaze you. A desired destination that ultimately seems like paradise.
It is named twin beach since the extended shoreline is definitely shared by 2 adjacent sitios, such as Nacpan and Calitang.

The Subic beach is situated in Calintaan islands, Matnog, Sorsogon. The beach remains uncommercialized and never visited by many tourists. But considered as among the most attractive beaches in the Philippines. It has a truly white/pinkish fine sand, that each time you step, you might think you are stepping on flour.

Apart from visiting the beautiful beach, certainly, there are 2 other getaway that you could visit. Like a cave and when you have enough time you do snorkeling on chosen close by caves and take photos with the corals as well as fishes.

Aside from the caves you can go to the fish pen or fish sanctuary. There is no charge when visiting the place but it's a good idea to buy fish food and enjoy feeding them.