Top 10 Beautiful Islands in the Philippines You Should Visit

Alex Dalley September 30, 2014 General, Video No Comments on Top 10 Beautiful Islands in the Philippines You Should Visit

Top 10 Beautiful Islands –  With 7,107 islands,  everyone can enjoy any kind of adventure from snorkeling, scuba diving, surfing, diving, and more.  So, explore these islands in one country called Philippines!

Boracay Island is described by its stunning beaches, that feature super-fine white sand outweigh by rich green vegetation as well as crystal blue waters. The white beach sand in this island draws everyone's attention. However, there are also private small bays found in several spots around the island that one can find. Boracay has recently the victim of massive tourist development, however, still maintains its pristine appearance as well as a whole lot of native enchantment.

Palawan is considered as an ecotourist's paradise with its clear, placid waters, massive limestone, and wilderness that offer tourists spectacular views in any angle. The island comes with a variety of resorts, dining places along with other amenities. However, still preserves its strong natural beauty. Plenty of waterfalls, mangrove forests, natural springs, and rivers navigate the island. The famous El Nido is situated on  the northwest of Palawan. It features caverns and turquoise lagoons which lead to private beaches.

The St. Paul Subterranean River National Park, known as Palawan's crown jewel is an underground river that has received a recognition as a World Heritage Site. There are lots of wildlife to enjoy also; Palawan has 379 coral species, 279 bird species, and 58 land mammal species. 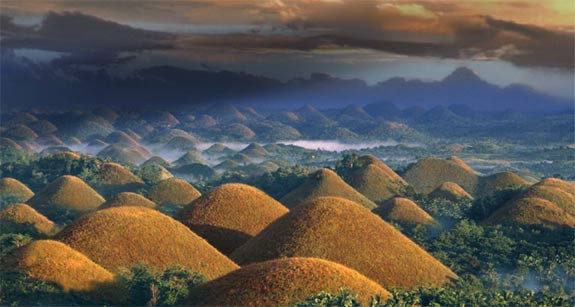 Bohol is called “the Jewel of the Philippines.” It's solid beauty is perfect for nature lovers as well as adventurers. The coast attributes the sparkling waters and abundant beaches so common in the Philippines. When it comes to inland, you can find rolling hills as well as mahogany, teak wood and also bamboo forests.

The scenery is filled with 17th and 18th century Spanish watchtowers and Jesuit Baroque churches. Bohol is well known for its Chocolate Hills — a large group of perfectly circular mounds which turn into a chocolate-brown color during dry season. The island also encompasses a variety of spectacular waterfalls — most of them hidden in remote areas throughout the island. Camiguin was made by volcanic activity, and because of the volcanoes that comprise this pear-shaped island as a main attraction. Mount Hibok-Hibok, the only active volcano in the island, sticks starkly over the surrounding of the blue-green water, steam soaring from its plenty of vents.

Camiguin likewise features black beaches — crystal clear water, unspoiled beaches with black sands made from volcanic residue. At the end of the sand spectrum, the Camiguin's most popular destinations called White Island, encompasses a sparkling white sandbar as well as an unspoiled look out of Mount Hibok-Hibok. The island offers the determined adventurer plenty of lagoons, cascading waterfalls, and hot and cold springs.

Tubbataha Reefs Natural Park composed of 97,030-hectare Marine Protected Area (MPA) in the westernmost Philippine province. It is situated 150km southeast of the city of Puerto Princesa, at the center of the Coral Triangle.

A remote beautiful island more than 90 maritime miles from the province of Palawan. This island has plenty of underwater scenery. The stunning sandy lagoons can be found here as well as stiff cliff walls, abundant marine life of assorted species, and reef platforms. You can find more than 500 marine species and corals.  If you love diving, then this island is perfect for you.

The island is situated in the province of Pangasinan, 250 kms. from Manila. The National Park encompasses 1,884 hectares of land with 123 islands. Nevertheless, only 3 islands are developed for tourism such as: Governor, Quezon, as well as Children's Island.

Among the 3 Islands, the Governor's Island only has a Guesthouse that is well suited for family use. It offers 2 bedrooms, living room, dining room, comfort room, bathroom, and kitchen. The guesthouse also provides Linens, drinking water, generator lighting, fans, dining and cooking equipment.

Things to do in Hundred Islands:

Coron is located in the province of Palawan and considered as a second class municipality. This island is well known for shipwreck diving, spectacular steep cliffs, rare marine animals, and emerald colored waters. Tourists can enjoy scuba diving, snorkeling, and some other water sports. However, if you want to view dozens of huge Japanese ships that sank in this island during World War 11, then this island is your best choice. Aside from all these features, this island is also well known for its variety of marine species and coral reefs. It is also included as top 10 best scuba diving places in the world.

The Batanes island is the smallest province found in the Philippines when it comes to population as well as land area. Basco is the capital of Batanes located in Apari, Cagayan. Basco is only 190 kilometers away from the south of Taiwan. Batanes island sits in the Pacific ocean and meets the China sea. It consists of 10 small islands as well as islets namely:

The 10 small islands have been in typical possession of rugged cliffs gathered at the feet by fuming waves, emerald slopes beautifully kept by countless cows, as well as boxy, cobblestone walled homes covered by cogon-thatched roofing. However the adventure starts when you get that first step on hard ground.

Batanes is surely a mind-boggling mixture of majestic, impacting landscapes as well as charming lifestyles. The islands have huge cliffs, the hills appear to roll on permanently; the houses are typically small. The Ivatans which are the natives of Batanes are a friendly group.

Similar to any destination, no common schedule can totally capture the Batanes experience. You can find endless ways to discover Batanes since Batanes itself can be an endless trove.

Pamalican island is found in the province of Palawan and a very remote island. The place is surrounded not less than 7 kilometers of stunning coral reefs, and relaxing turquoise waters. You can find a magnificent Amanpulo Resort,  a private luxury resort intended for relaxation and serenity.  Natives and tourists can enjoy scuba diving, snorkeling, windsurfing, and other water sports. If you do not want to enjoy water sports, then you can  simply simply bask under the heat of the sun.

Apo Island is located in the Philippine.  It is a tiny island situated near the southern part of the Island of Negros,30 km south of the Dumaguete City.  It is rated as one of the top 10 diving sites on earth. Encompassed by countless species of fish as well as marine life, this island is usually a gem of the underworld. Mostly, spectacular diving is accessible at deep sea level. However, the beautiful reefs can be found on the shores of the Apo Island Beach Resort. This resort is situated in a private cove in distinctive rock formations on the stunning white beach.

The island is also perfect for scuba diving and also snorkeling.